Well I had plans to write another entry shortly after the last one was uploaded but somewhere along the road, I got sidetracked and anything I had in mind to write is now history and probably not relevant either.

I did have plans to go out during June but home / personal events over took those plans sadly including a 2/3 week period were I picked up a non Covid virus from somewhere which included a very irratating tickly cough. Yes definity not was Covid as I have been tested but are the tests accurate though? Anyway, I much better now although still not 100% but then again at this stage of my life, probably never be 100% I suppose.

Over recent months, I have manage to keep in contact with some friends including a new one who I came across online in March.  However, one girl whose name I will mention called Stella from Southport now falls into the category of ‘timewaster’ although I accept she is geniune, does go out and dresses nicely too. Due to Covid, I had come across a handful of girls who I communicated with and the idea was to eventually meet when things got better but as we realised that took two years. With Stella, we had regular communications, exchange images, seem to have things in common and also being local too, that at end of last year, thoughts were finally thinking of arranging  a meet. Thinking we were heading in the right direction, I had sent a message to her at end of January with common thoughts of a March meet! What happens afterwards, remains a mystery as I have had no response from her what so ever although I have followed my original message on two occasions but still no reply. My last message in April, Stella has avoided to open although she still visits a particular forum in question and is on there regulary, may be her profile is partially untrue? I know I have not said anything out of turn etc but cannot for the life of me think why she has done this. If she ever reads this, although unlikely, may be you take common courtesy and give me an explanation because it is extremely rude and most of all wasted my time. I think I deserve an apology but no doubt one will never be forthcoming.

Anyway, we move on with something far more positive and there are geniune girls out there to become friends and one of whom called Janine I commence communication in March which ultimately led to us meeting at Sparkle. Although she does not live locally, it became clear with had things in common and hit it off more or less straight away. As many of us girls know, attempting to meet a new person is potentially fraut with many problems but in this instance, I knew enough that Janine was geniune and hoping she thought the same with me. Anyway, after a little encouragment, she decided to come to Sparkle for the first time and I would be her guide for the weekend. More of the Sparkle weekend in my next blog entry.

I still continue to sell some of my clothes on Ebay, the amount of clothes are getting smaller and my bank balance is slowly increasing. However, I must admit I think some items are just not meant to sell so may be a donation to the local charity shop but for now, I will continue and see how things go come Autumn. By then, probably have more items to sell. In the meantime, I have purchase a couple of summer dresses with also Sparkle in mind, as well as a couple more box pleat type skirts too. Ah, you may wonder what the latter purchase is all about. Well, about nine months ago, I decided as I was now a pensioner, that I am going to gradually change my dress style to what some would suggest as Aunty / Granny style to take account of my age. I tried the look late last year in private, to see if it worked as well if it appealed to me too! Yes, it worked and I like the look which is based on a couple of my Aunties were they dressed with traditional blouse / cardigan complete with box pleat skirts. The latter skirts being knee or calf length has always been a fetish of mine as I love the style of them and especially when dressed with traditional 50’s / 60’s underwear and yes stockings too. However, I will make a gradual approach to this ‘new’ look as I now have the choice of clothes to acheive this mature appearance and just may be my first outing be made next month, sort of a test? It will interesting to see what the reaction will be!  Regardless, ceratinly for the time being, I will continue with the KD look as some girls call it and wear what is appropriate for where I going and who I am meeting. 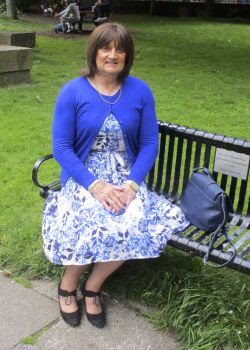