It has been well over two months since my last entry and the title of this thread tells a story to say the least. Yes, life changes in one second especially when you least expect it!

Well the good news first. Six days after I wrote the last blog entry, I actually manage to get out for the first time in 21 months, last outing being December 2019! An unexpected  opportunity arose with a new found friend Carole from Crewe, who I have been in contact for a couple of months. Whilst chatting with each other a couple days previously, I realise I had an opportunity to meet Carole during an afternoon and by chance Carole was free too. So we arrange to meet for tea and scones in a Garden Centre near Nantwich. Anyway, the day arrived and attempting to decide what to wear, along with remembering to apply make up too, the morning proved to be a challenge but eventually outfit chosen, make up applied and off I went. As for the outfit, well went for bootleg jeans, smock type top, short jacket, small heels and of course hangbag too for more of the everyday / casual look.

After a slightly longer journey than I anticipated, I finally met Carole at the Garden Centre were we had a nice afternoon tea including sandwiches along with a good natter getting to know more about each other. Much to our surprised we had a number of things in common and along learning more about each others past. Soon enough, time flies when enjoying good company, it was time to say our farewells and head home, but not before agreed to meet again sometime in the future. At that time, I was thinking, at last I’m out again and won’t be long before another outing would be on the cards!

Now this is were the title of the thread comes into play! A few days after my outing, my and M.R’s lives were changed due to an unexpected out of the blue family emergency which would change our circumstances for the short to medium term with priorities were now firmly placed elsewhere including caring duties! Our lives were completely flipped upside down especially we had been thinking we were beginning to turn the corner and things were now looking a bit better especially with the lifting of Covid restrictions, looking forward to our retirement and thought the worst was over after what happened earlier in the year. How silly to think like that and things now got worst instead. How life can be so cruel, but many many people in the world know that feeling anyway but you always think never happens to you. However, its life were it plays to your dealt hand of cards instead.

So what has above to do with me as KD? Simply, the change of circumstances along more important change priorities means future outings are very much at a premium and realistically be next year before I may be able to consider an outing again. Sadly this puts meeting new found friends on hold for a while longer with the only possibily of an outing would be at short notice assuming I have a friend to meet with my past experience, highly unlikely it would happen. Strangely this opportunity arose a few weeks ago and met Carole again but more by good fortune than anything else. Another enjoyable outing never the less but I am not sure I will be so lucky again.

So once again, things outside of my control dictate my femme life and it could be sometime before I make an appearance again. However, my (our) proirities are more importantly elsewhere and always remain so until back to some sort of normality. It could be a while! 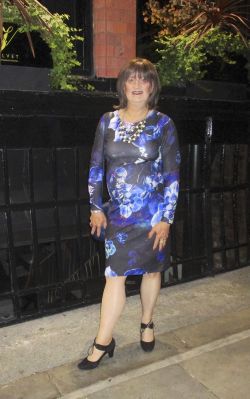